Why was Vernon Presley imprisoned? where did he die 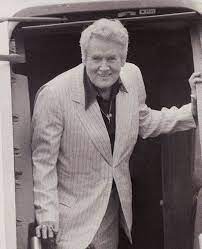 One of the most important cultural figures in history is undoubtedly Elvis Presley. The fact that he still has a devoted fan years after his death shows the extent of his popularity. Baz Luhrmann’s “Elvis” traces his stratospheric ascent with a special emphasis on his interpersonal relationships.

Elvis discovered in his parents his infallible support system that every successful person needs. His father, Vernon, had always been very supportive of his aspirations to get into the music business. He was instrumental in making Elvis a popular singer. While his son’s fame and fortune made it seem like the Presleys had never encountered trouble, Vernon Presley had actually faced some extremely challenging circumstances. His story would make excellent footage. Here’s what you need to know about him if you want to learn more about what happened and the struggles he had as a young man.

Why was Vernon Presley imprisoned?

The Presley family faced some tough financial times before Elvis’ fame brought him plenty of cash. When Gladys and Vernon found out they were going to be parents, they were already struggling to make ends meet. When Elvis was born, the economy was still suffering from the global economic crisis. “At that time, my wife, Gladys, and I were essentially the poorest people in the world. But when we found out we were going to be parents, we were over the moon and excited. Even though I was only 18, I never thought I would not be able to care for Gladys and the child while she was pregnant, Vernon said in a 1978 interview with Good Housekeeping.

The urge to earn something extra for the family arose from the obligation to have a child. Vernon did odd jobs to keep her going, but it was insufficient. Then he found himself in a situation that made her problems worse.

He was found guilty of forgery in 1938 and sentenced to three years in prison. Orville Bean, the buyer of the hog he had sold, signed a check for less money than he owed. Vernon knew Bean wouldn’t do things right. So he, along with his brother-in-law and a friend, forged the check. It is not known if they changed the value of the check or wrote a different check while impersonating Bean’s signature. What is certain is that they were arrested.

Vernon was sentenced to three years at the Mississippi State Penitentiary in Parchman for his crime, but was released after about eight months of good behavior. The Presley family, forced to vacate the home that Vernon had personally built for the family, found those eight months challenging.

Vernon Presley’s cause of death

Vernon Presley died of a heart attack on June 26, 1979 at the age of 63. He had a long history of illness and a serious heart problem. Given that Vernon died two years after Elvis, some people speculated that he might have suffered from a broken heart.

Elvis and Vernon had a strong relationship. He oversaw operations at Graceland and toured with his son. After Elvis’ death, he was also appointed executor of the estate. It was sad for him to lose his son at the young age of 42 because he helped develop Elvis’ abilities and goals. It will be years before I can grasp the reality that Elvis died because it happened so suddenly, he claimed.

More than anything, Vernon had always wanted to be with his family. Gladys, who had died years earlier in Memphis and was buried there, was transferred to Graceland by his arrangements. In addition to Vernon Presley’s final resting place, Elvis is also buried there.