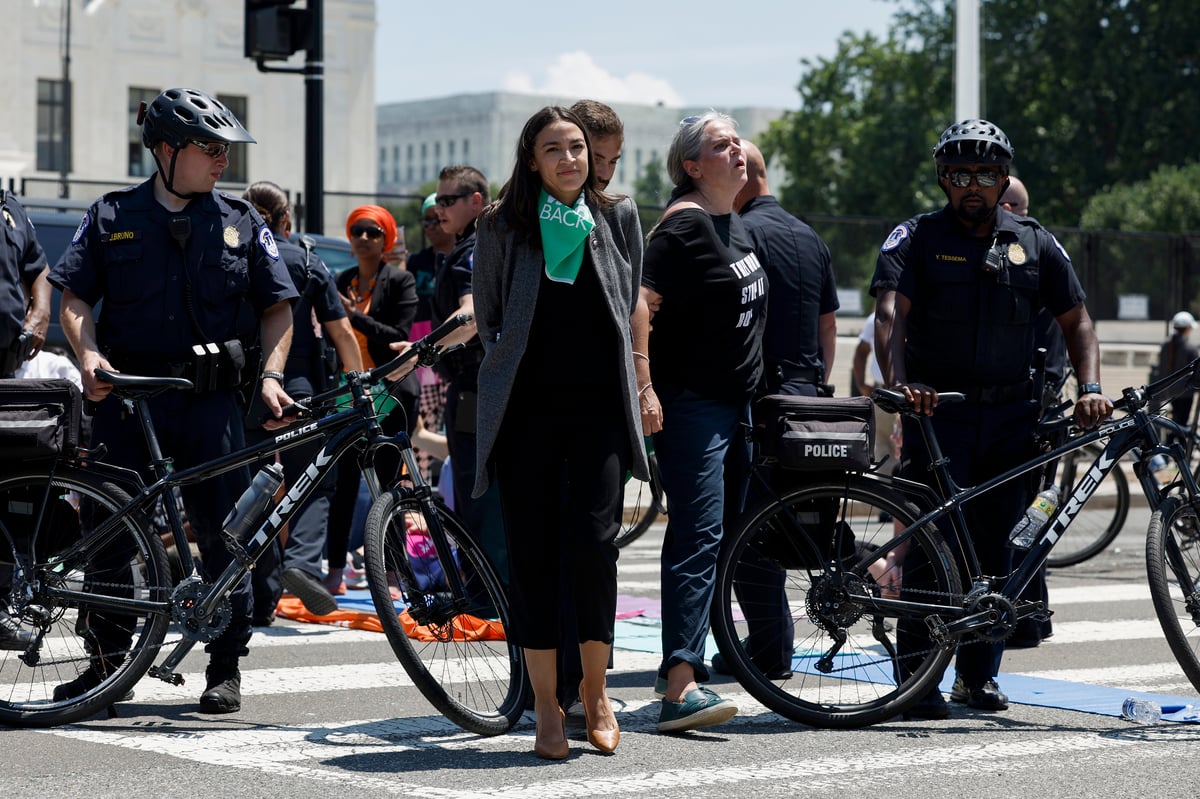 Capitol Police confirmed they had arrested 16 members of Congress, including Alexandria Ocasio-Cortez and Ilhan Omar

Democratic US Representative Alexandria Ocasio-Cortez (AOC) was handcuffed and arrested while attending an anti-abortion protest.

AOC and a group of Democratic congressmen including US Representatives Ilhan Oman, Rashida Tlaib and Cori Bush joined the protest Tuesday, July 19.

Members wore green bandanas that read “Won’t Back Down” as they marched from the Capitol to the Supreme Court.

Capitol police ordered them to “stop listening” before handcuffing AOC and other prominent Democrats away.

The protest comes after the Supreme Court’s decision to overturn Roe v Wade, which had protected abortion rights in America for nearly 50 years.

The Supreme Court ruling is expected to result in abortion bans in nearly half of US states.

Access to the Supreme Court building has been blocked by a large black “unclimbable” fence to keep protesters out since the verdict.

Here’s everything you need to know about AOC and why she was arrested.

Who is Alexandria Ocasio Cortez?

Alexandria Ocasio-Cortez, most commonly known by her initials AOC, is a 32-year-old American politician and social justice activist.

Advertisement
US Representative Alexandria Ocasio-Cortez is arrested after participating in a sit-in with activists from the Center for Popular Democracy (Image: Getty Images)

AOC has served as the U.S. Representative for New York’s 14th congressional district since 2019.

She garnered national attention as the youngest woman ever elected to Congress, taking her seat at just 29 years old.

Before entering politics, AOC worked as a bartender, founded the publishing company Brook Avenue Press and worked as an organizer for Bernie Sander’s 2016 presidential campaign.

Why was she arrested?

AOC was arrested along with other US Democratic officials while attending a protest against abortion rights.

The group marched from the Capitol to the US Supreme Court.

Once there, they sat down on a pedestrian crossing and blocked the road in a peaceful protest.

In a tweet, Capitol Police said the group was “starting to block First Street, NE” and that: “It’s against the law to block traffic, so officers will issue our standard three warnings before they.” start arrests.”

Officers then began arresting the lawmakers, handcuffing them and taking them to another area for examination.

The group was protesting the Supreme Court’s recent decision to overturn Roe V Wade, which had protected abortion rights in America for nearly 50 years.

The latest ruling means states can decide individually how they feel about abortion, with it being estimated that over half have now banned the procedure.

Who else was at the protest?

The protest was attended by prominent US Democratic officials including AOC, Ilhan Oman, Rashida Tlaib and Cori Bush.

AOC watches as activists and lawmakers are treated by US Capitol Police officers following their arrest (Image: Getty Images)

Capitol Police later confirmed that they had arrested 16 members of Congress.

Here are the arrested members of the Democratic Congress:

The protest was live streamed by the Center for Popular Democracy (CPD), a social justice movement that organized the event.

In a statement, arrested New York Democrat Carolyn Maloney said: “I’m privileged to represent a state where reproductive rights are respected and protected – the least I can do is risk my body for the 33 million.” to put women at risk of losing their rights.”