Olivia Tyler, a 33-year-old nurse and TikToker, received a lot of criticism for posting a video on her TikTok profile right after the death of one of her patients. People on social media berated her for lacking empathy and questioned who she really was. The video, which is now popular on all social media sites, was posted on June 17th. Her TikTok handle, “Olivia tylerr33,” captioned, “It never gets easier.” “Lost a patient today,” reads the video’s caption as she paces the hospital corridor. It quickly went viral, and many of the replies were kind and talked about how hard it is to be a doctor like that. 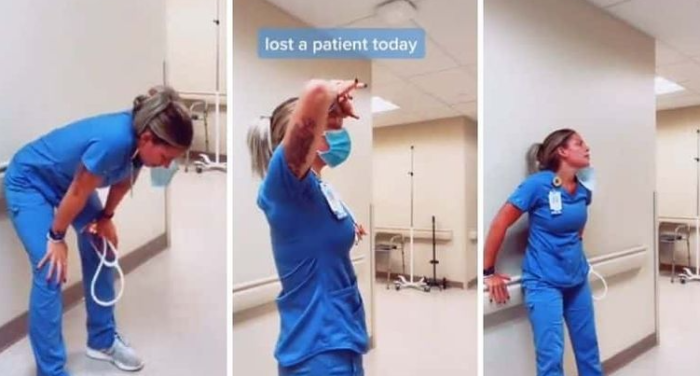 The nurse deleted the video after getting so much backlash, but it was too late. Other TikTok profiles actually “duoted” the post to draw attention to it and say what they think of it. “When someone dies, their first thought is to create a TikTok, edit it and post it for comments. And exposure,” said Twitter user marc0p0l0o3. Olivia hasn’t said anything clear about the mean comments. But many of the comments on her later TikTok videos speak of a new post.

The people who use Twitter didn’t wait much longer before making their voices heard. One tweet, seen more than 14 million times, said: “Oh man I can’t believe my patient died let me go and do a tiktok rq [real quick]’ along with a link to the video.

Another Twitter user said: “I understand you want people to know how hard it is to work in healthcare but it seems like a patient has only been used for likes and views. There are better ways to share stories and this wasn’t one of them.

Some of the nurses also spoke what they thought and said what they thought on the subject. “No nurse has ever done that. We’re taking care of more than one patient at a time, so when we’re helping patient A, we’re also thinking about patients B and C. No time for that, and frankly, it’s giving you a lot of trouble. That’s how you get attention,” wrote @Ray82253885.

Another nurse, @anccpt on Twitter, said: “I’ve seen a lot of people die under my watch during the pandemic – how many – and this kind of performative garbage makes me so angry I can’t even explain it.”

TikTok has always been at the center of controversy, mostly because of people posting stupid and illogical things on this social media site. But this isn’t the first time a nurse has been involved in such a fight. In 2021, a nurse was fined for what she is said to have done to patients in films, which turned out to be pranks.