Nikki Catsouras died on October 31, 2006 in a horrific accident in her father’s Porsche 911 Carrera. She was only 18 years old.

Nikki was told she couldn’t drive her father’s Porsche, but she did anyway. She died when the car went out of control because she was speeding.

Nikki’s body was in such bad shape after the horrific accident that it couldn’t even be identified. Her parents sued the California Highway Patrol for posting pictures of their daughter’s accident online, which they say was unfair.

The images that angered the Catsouras family were saved and sent to them by the CHP’s Aaron Reich and Thomas O’Donnell. 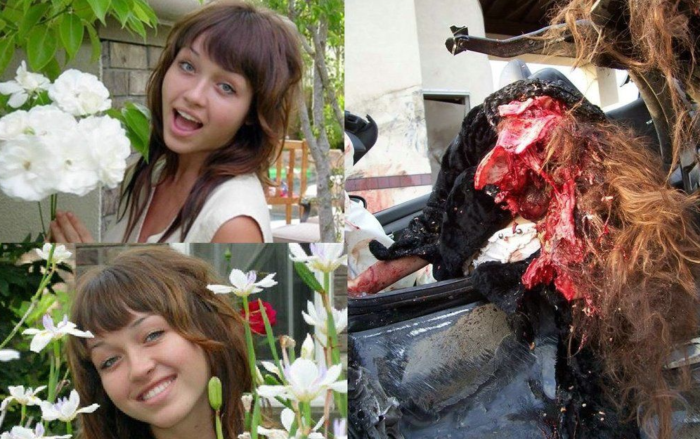 Who was Nikki Catsouras?

Nikki Catsouras was a freshman in college. She lived with her parents and two sisters in Ladera Ranch, California.

Catsouras was a sweet young woman who loved making videos and did well in college. Her parents loved her so much.

When her father caught her sneaking cigarettes into the house, he took her car keys away. Little did he know it would be the last time he shared house rules with his daughter.

Porshe Accident – Cause of Death and Accident Photos

After the accident, Nikki’s body was in pieces and CHP officials were sued for releasing the crash photos, which quickly went viral on the internet.

According to toxicological tests, Nikki’s body showed traces of cocaine. The Porsche had been blown to bits and the teenager’s head had been cut off. when the police met her.

Nikki had lunch with her parents at their house earlier in the afternoon and his father went to work. After 10 minutes, Catsouras got into her father’s Porsche and quickly drove away.

Her mother immediately called her husband and he called 911 to help them locate their daughter. At approximately 1:38 p.m., Nikki was driving on 241 Toll Road toward Lake Forest.

The girl was driving at about 100 mph when she tried to run over a Honda Civic. She lost control of the Porsche and it drove toward the tollbooth. The Porsche went off the road and crashed into the tollbooth, which was made of concrete.

Nikki’s body was torn apart and she was found dead on the spot. Photographs were taken of the crime scenes as part of the investigation, but officers did so in violation of CHP rules and the photographs were found on the internet the next day.

After people started emailing them disturbing photos of their daughter, the Catsouras family felt harassed and sued the CHP.

Nikki was the eldest daughter and she had just turned 18 when she died in the horrific accident.

She was a talented high school student in her freshman year of college. She is said to have been addicted to drugs, which resulted in a horrific car accident that killed her.

After Nikki’s photos went viral, the younger sisters were told they couldn’t use the internet. Her younger sister Danielle pulled her parents out of school so she could study at home because they feared her friends would make fun of her with the pictures.