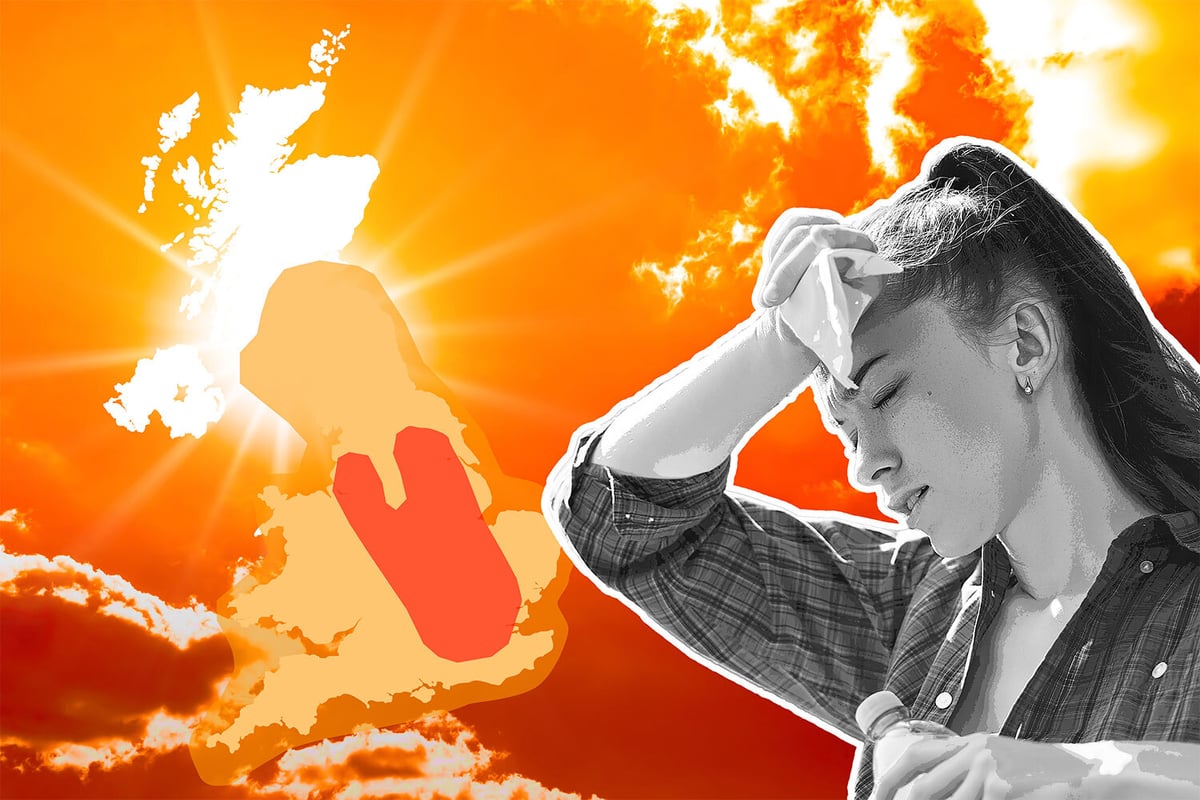 Britain could have its hottest day on record this week as temperatures continue to rise.

Currently, the highest temperature in the UK is 38.7°C – recorded in Cambridge in 2019.

What is the weather forecast for Monday?

London should expect the highest temperatures on Monday with highs of 38C. By 4pm the mercury had reached 38.1C at Santon Downham, Suffolk, making it the hottest day of the year.

Scorching temperatures in the capital mean it should be warmer than Nassau in the Bahamas (32°C), Kingston in Jamaica (33°C), Athens in Greece (35°C) and Dakhla in Western Sahara (24°C ).

It comes as new records were broken in Wales and Northern Ireland on Sunday.

What is the weather forecast for Tuesday?

Tuesday is expected to be even hotter, with temperatures potentially reaching 40C in England

South East England to the North West and North East will experience the warmest temperatures, while temperatures in Scotland and Wales could also top 30C.

Brits are being urged to stay indoors and wear sunscreen and a hat, stay in the shade and stay hydrated with water between 11am and 4pm during the hottest parts of the day.

Scottish temperatures soar to over 30C

Temperatures have soared to over 30°C in Scotland.

On Monday afternoon, mercury rose to 30.8C in Aboyne, Aberdeenshire and Edinburgh and reached 29.9C in Aviemore, the Met Office said.

Temperatures have not broken Scotland’s August 9, 2003 record of 32.9C at Greyrcrook in the Scottish Borders, but forecasters said that could happen on Tuesday.

Ireland records hottest temperature in more than a century

Ireland has recorded its hottest temperature in more than a century, according to the Met Eireann, as parts of Dublin hit 33C.

A yellow high temperature warning remains in place across the country as another day of high heat looms.

Data from Met Eireann shows temperatures soared to 33C on Monday at Phoenix Park in the capital, making it the provisional hottest day on record in July.

It also breaks the highest temperature record for the 21st and 20th centuries.

Northern Ireland records its hottest day of the year

Northern Ireland has recorded its hottest day of the year, with temperatures soaring above 30C in some areas.

People have been advised to stay out of the sun, although there is no heat warning in the region.

The Met Office said that as of 5pm a temperature of 30.9C had been recorded in Derrylin in Co Fermanagh and 30.6C in Armagh.

Tips on how to protect yourself when temperatures rise

Experts share tips on how to stay safe during the heatwave.

Temperatures have topped 38C in the heatwave.

The mercury had reached 38.1C by 4pm in Santon Downham, Suffolk, making it the hottest day of the year.

RSPCA officer Chris O’Brien locked himself in his car on a hot day to show just how bad conditions can get for pets left in locked vehicles.

Luton Airport is suspending all flights due to high temperature damage

Luton Airport has suspended all flights due to a “surface fault” on the runway.

Extreme temperatures across the country have wreaked havoc on the transportation system, and holidaymakers are now hoping to take off.

A statement from Luton Airport said: “A surface defect has been identified on the runway following today’s high temperatures.

“Engineers were immediately called to the site and repair work is currently underway to resume operations as soon as possible.

“We would like to apologize for the inconvenience caused.”

The maximum temperature in Wales rises to 37.1 °C

The highest temperature on record in Wales has now risen to 37.1C in Hawarden, Flintshire, preliminary figures from the Met Office show.

The NHS is coping well with the extreme heat

Downing Street said the NHS is “coping well” with the extreme heat and no deaths have been reported centrally at this time.

When asked for an update on the heatwave, the Prime Minister’s official spokesman said: “They had the Cobra meeting today where they received updates from relevant public sector teams on issues such as health, transport and schools.

“We have not yet seen any significant impact on these areas. For example there is no evidence of mass school closures, the NHS is coping well and obviously there are additional mitigations and Network Rail and others have already made some mitigations with some reduced service and speed limits.”

As for deaths, he said there were “none that have been reported to us centrally at this point,” but that doesn’t mean there haven’t been any.

At 3pm, the highest recorded temperature was 37.5C ​​(99.5F) at Kew Gardens in west London, according to the Met Office.