WATCH: Photos and Videos of Toronto Cherry Blossoms in High Park Going Viral on Social Media: A large crowd gathered in Toronto’s High Park on Thursday to view the cherry blossom, or sakura, trees during their “peak bloom” season. Several visitors flock to High Park in early spring to admire the magnificent cherry blossoms. Many people have asked when is the best time to see the cherry trees in full bloom, and the optimal time is late April or early May. Most of the sakura trees can be found in Hillside Gardens, with a few near Duck Pond. 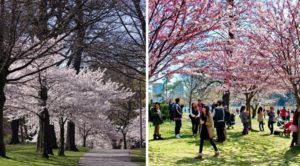 The centuries-old Japanese custom of viewing flowers, known as hanami, attracts hundreds of Toronto residents each year, with flowers typically lasting 4 to 10 days, depending on the weather. Toronto Mayor John Tory announced on Twitter on Tuesday afternoon (May 3, 2022) that the trees are officially in their “peak flowering season,” encouraging locals to enjoy the beauty. On Tuesday night, a crowd could be seen wandering around the site, taking photos and taking in the scenery.

By 7:30 a.m. early Wednesday morning, onlookers began to gather again. A police officer was stationed in the park on both days. The majority of the trees in High Park are on the west side of Grenadier Pond, where 50 were planted between 2017 and 2018. The location is not accessible by car. High Park isn’t the only area in Toronto where you can see cherry blossom trees; Others include Trinity Bellwoods Park, Woodbine Park and the Japanese Cultural Center.

Sakura on the Toronto Islands

There are about 30 Japanese cherry trees in the Toronto Islands, which is a little known fact. If you want to avoid the crowds at High Park when the trees are in bloom, going to the islands to watch the trees is a great alternative. You are on Center Island, which is near the foundation of the bridge at the south end. The ferry docks at Center Island are about a 10-minute walk away.

A Brief History of Sakura Trees

Sakura trees, also often known as cherry blossom trees, are prized for their grace and beauty. They are also known for their limited flowering time, which is unfortunate. “Mankai”, “Kaika” or “full bloom” is achieved about a week after the first flowers appear. The first Japanese Somei Yoshino cherry tree was planted here in 1959 and was visible to Tokyo residents.