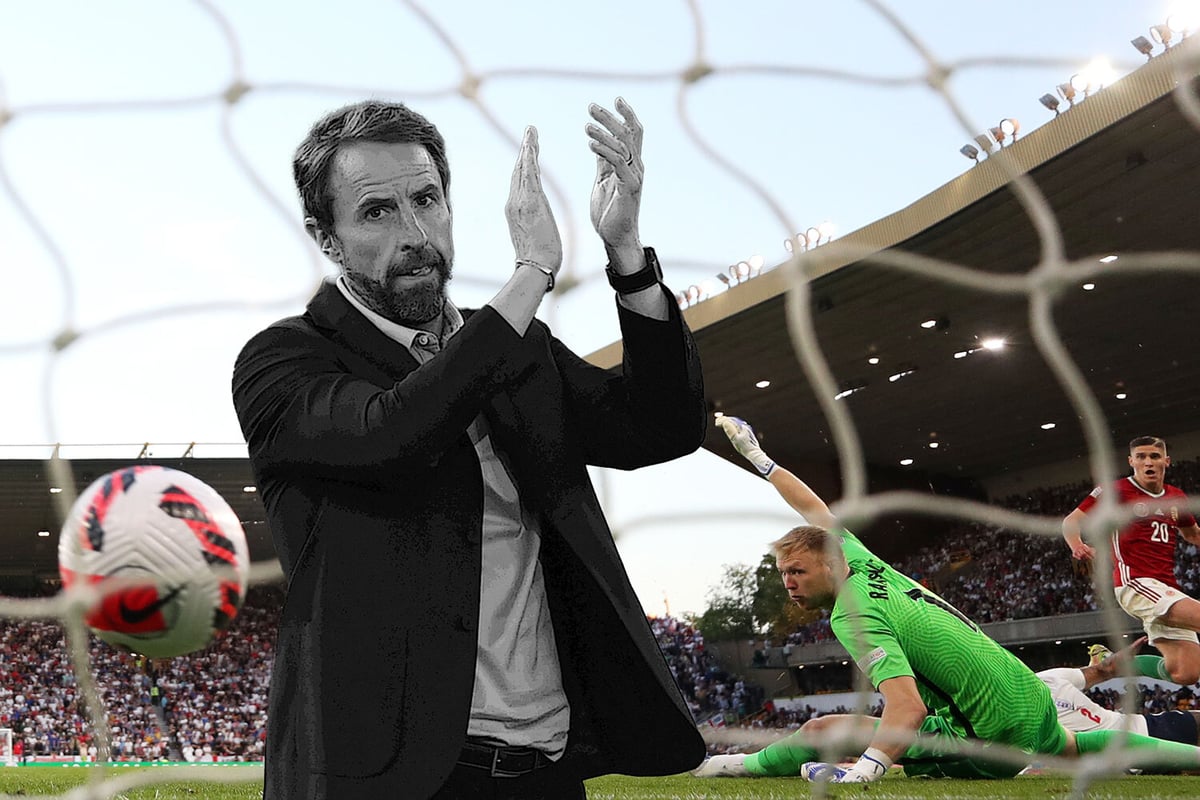 It was a night to forget for the Three Lions as they suffered a 4-0 defeat at Molineux.

How grimly ironic that England looked stuffed to the point of paralysis in a game against Hungary on Tuesday night.

This extended international break was less “soccer festival”, more “Bruce Bogtrotter’s cake rehearsal” or “Mr. Creosote’s gossamer mint’ for the Three Lions, with a gasping, red-faced squad being force-fed for more minutes than they could seem to stomach.

After such a long and relentless campaign, it was perhaps predictable that Gareth Southgate’s men would spend much of their fourth tour in a week and a half stumbling around with the aching lethargy of fattened foie gras. However, the magnitude of the Hungarians’ hunger for destruction was far less predictable.

The headline will, of course, be one of England’s humiliations – a deplorable 4-0 collapse tonight, cementing them bottom of their group in the UEFA Nations League and earning two points from 12 available over the course of the last few days.

This uncharacteristic clumsiness was rounded off with their worst home defeat since 1928 and was offset by a couple of unexpected losses at a side they hadn’t beaten since 1962. There’s probably a joke about London buses or something if there happen to be Hungarian late night talk show hosts who specialize in reading this.

Perhaps most alarming, however, is the fact that England are now just two games away from Qatar with no shred of momentum and little sign of how they can hope to regain it.

In the first quarter of an hour, the Midlands hosts had 75% possession, but their long stints on the ball were akin to the way an earthworm colony might ‘own’ a fax machine – just because they have it doesn’t necessarily mean they can be able to do anything useful with it.

As the visitors seized England’s stunned response to a routine set piece to take the lead midway through the first half, Southgate might have wondered if he had slipped into an uncomfortable déjà vu. Meanwhile, he must have felt like a Punxsutawney weatherman on February 2 as his side caved, was jaded and offered little in the way of a meaningful response.

And then it got worse again.

And then it got even worse.

With the final whistle, this was no longer Groundhog Day. It could also have been The Day After Tomorrow.

Apologists will argue that this result and England’s most recent all-time low came amid a tornado of mitigating circumstances. Fatigue, experimentation, apathy – all of these have, to some extent, played their part in these fortnightly terrors. Likewise, the Three Lions aren’t the only European superpower to falter this month. World champion France, for example, is also bobbing without a win at the end of its Nations League group.

But excuses notwithstanding, valid or not, there are things that need to be approached with more critical thought than simply curling our collective eyelids, sticking our fingers in our ears, and discordantly humming “Sweet Caroline” like a flock of unworldly gulls .

Few, if any, English players did anything remotely close to their best on Tuesday.

If we’re grasping at straws, no matter how flimsy, you could perhaps argue that Conor Gallagher – who falls squarely in the middle of a Venn diagram between Shrek 2’s Prince Charming and the Duracell Bunny – made another relatively compelling claim to a supporting role has right in midfield.

Jarrod Bowen has shown intermittently this week that he can generate a similar lively pulse to Jack Grealish, but he’s doing it in a way that should make your uncle, who shares nostalgic “proper garbage man” memes on Facebook, pretty happy too. Hooked after the break remains to be seen whether the West Ham winger has done enough to stay in contention, but the feeling is he must be a strong maybe at this point.

Speaking of the Stones, John’s eerie star-in-the-eyes tribute to Harry Maguire on the bench was a nice touch, but one that will do little to ease the growing sense of unrest surrounding England’s key defensive options. His gentle farewell too late, at least it wasn’t his fault.

Meanwhile, Aaron Ramsdale chose an awkward time to demonstrate a hula hoop’s shot-stopping capabilities. Bukayo Saka was running around with the aimless, willful exhaustion of a child in the dying stages of a birthday party as her post-cake sugar rush began to wear off, and if Harry Kane had fallen any lower in search of possession he might have been with the bends Counterattack down.

This was a subdued display that carried all the frustrating frustration of a futile pursuit that England has largely been able to shed in recent years. It was like watching a character in a soap opera climb a flight of stairs, knowing full well that the set is actually going nowhere – performance for performance’s sake, melodrama without substance.

Equally worrying is the speed at which anti-Southgate sentiment is beginning to sink.

Long gone are the heady days of messianic vests and Atomic Kitten singalongs, which have instead been slowly replaced by the kind of shallow humiliation that has paid every English manager since the turn of the millennium.

Late chants of “You don’t know what you’re doing” seemed to reinforce a microcosm of national discontent that threatens to spread like termites in a clog factory. The booming boos that drowned out the referee’s final whistle were so loud that it would hardly have been a surprise to see them accompanied by torches and pitchforks.

In reality, the radical reaction to England’s recent slump is likely to be more in the direction of excess. As loathe him or him, Southgate’s relative success in major tournaments has deservedly given him enough goodwill to at least carry him to Qatar.

But this international break, as unnecessary and unwanted as it was by anyone other than the moneybags in UEFA’s hollowed-out volcanic cave, has raised many questions the manager needs to answer – and quickly.