Roger Federer and other former Wimbledon winners were invited to the All England Club on Sunday to celebrate the court’s 100th anniversary. 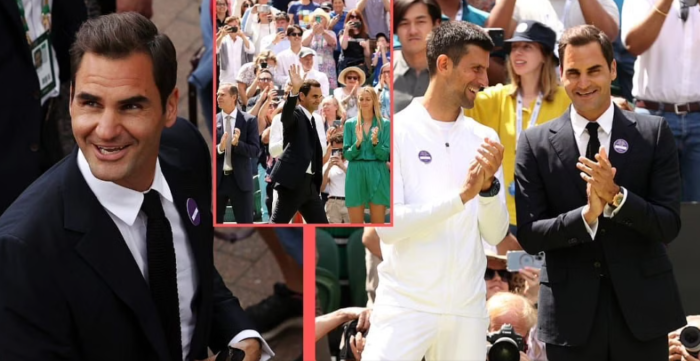 As their names were called, each former champion entered the court. Federer was the last champion to leave the tournament because they were called up in the order of their Wimbledon titles won.

The eight-time champion walked out to loud cheers and a standing ovation. He wore a suit and looked like a king. He was standing next to Djokovic, who was speaking to the Swiss upon the Swiss’s arrival.

Sue Barker, a legendary BBC tennis commentator, and John McEnroe, a three-time champion, hosted the event. Barker said, “Oh, we have an eight-time champion,” and McEnroe said, “His name is Roger Federer.” They were preparing for Federer to come onto the pitch.

As expected, the crowd cheered the 40-year-old the loudest as many were surprised to see him at the All England Club. Federer skipped Wimbledon this year because he needed more time to heal from his third knee operation, which he had last August.

Last year, the Swiss champion injured his knee during the grass season but still reached the Wimbledon quarter-finals, where Hubert Hurkacz defeated him. Federer’s last tour match was that and he hasn’t played since.

But he is expected to play again later this year at Basel and the Laver Cup and some fans are hoping the Swiss will play a full season next year.

“The one and only” – Juan Martin del Potro praises Roger Federer

The Wimbledon Twitter account posted just minutes after Roger Federer’s performance on Center Court. Juan Martin del Potro, who used to play against the Swiss and is now a friend, was quick to quote, tweeting the video and praising the eight-time champion.