Although iPhones are one of the most popular mobile phones out there, some of their capabilities lag behind those of Android phones. The App Lock feature is one of them. Apple’s iPhones never effectively had this feature built in. However, there are some solutions to this problem and this post will show you how to lock apps on iPhone using different approaches.

Also because every year Apple brings improvements to its iPhones where we see many new features. Now let’s take the iOS 14 operating system, which brings many improvements such as better home screen customization, redesigned widgets, a new app library and much more. But iOS 14 lacks some basic features common to Android phones. Record app lock feature in iPhones not added properly.

The methods are quite simple and are :

If you want to limit the time you spend using your iPhone, Apple offers a feature called Screen Time that you can use to limit digital devices.

First go to Settings and then click Screen Time on your iPhone. 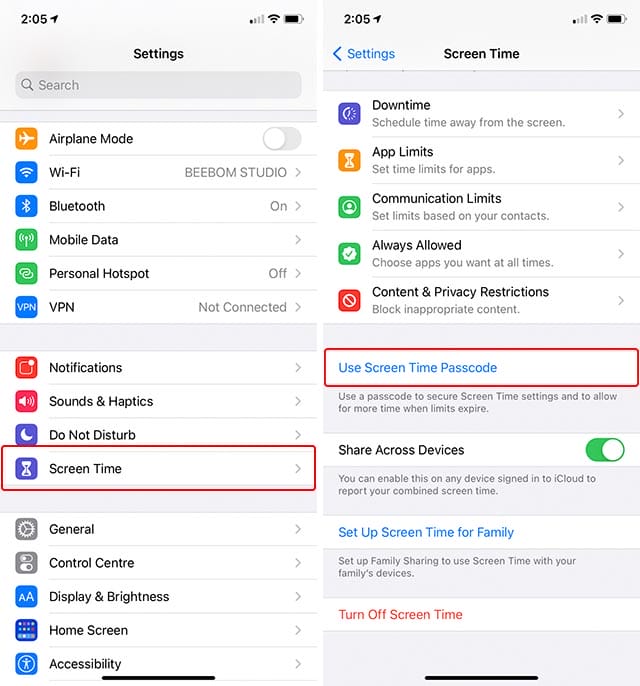 If you want to set a passcode that is different from your lock screen passcode, click Use Screen Time Passcode at the bottom of the menu. You can also choose to use Face ID or Touch ID.

After setting up your desired passcode, tap Add Limit. 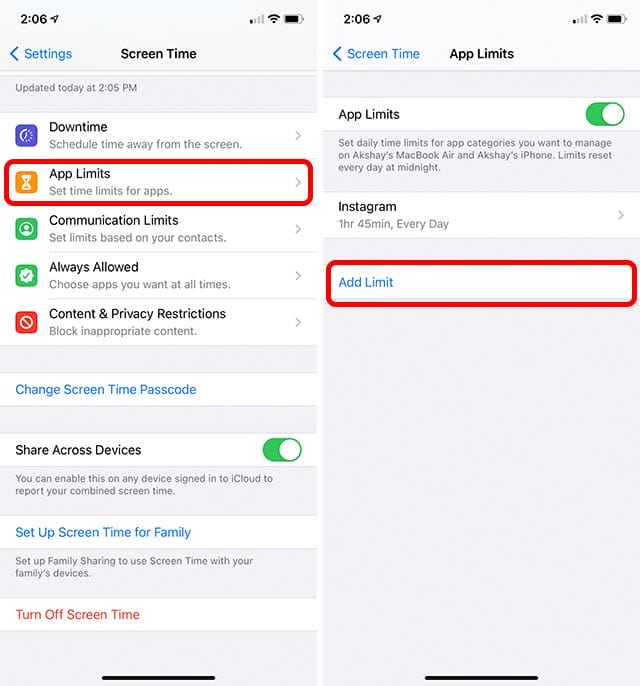 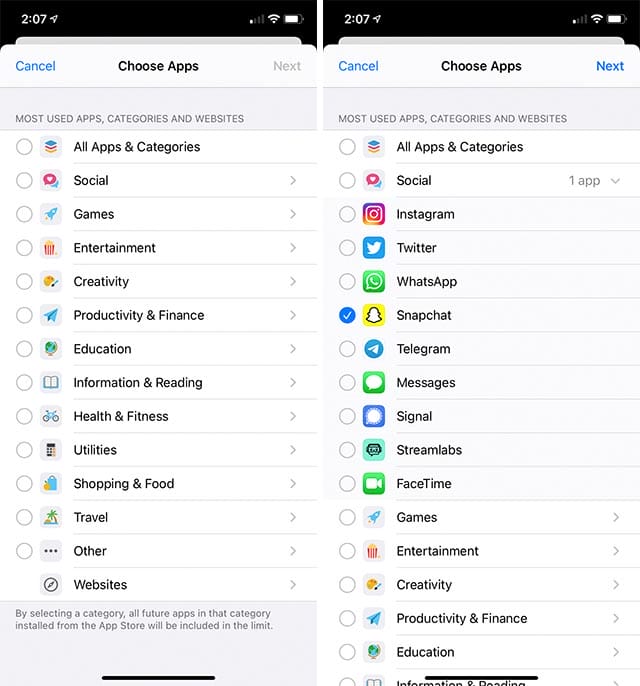 Then tap Next, set the time limit, and tap Add in the top-right corner of the screen. Make sure the “Block at end of limit” toggle switch is enabled. 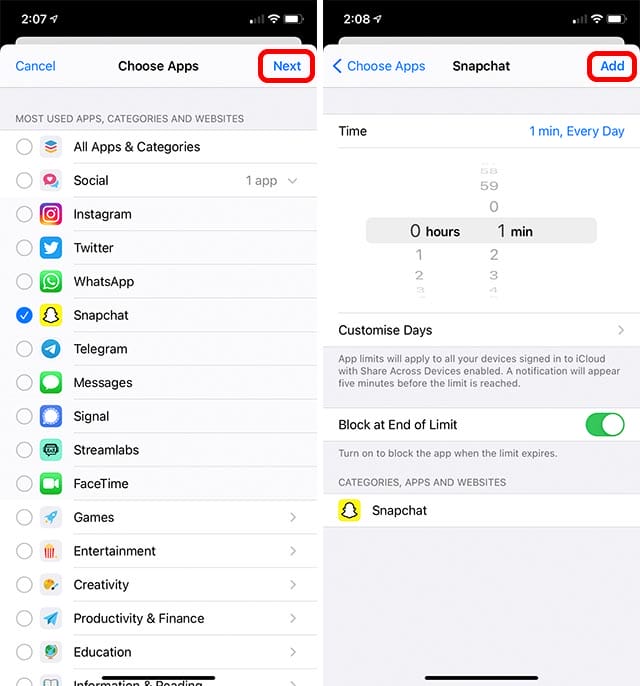 Then your selected app will be locked for the preferred time limit you set. You can also extend the time limit by clicking “Ask for more time” and entering the passcode to disable it. 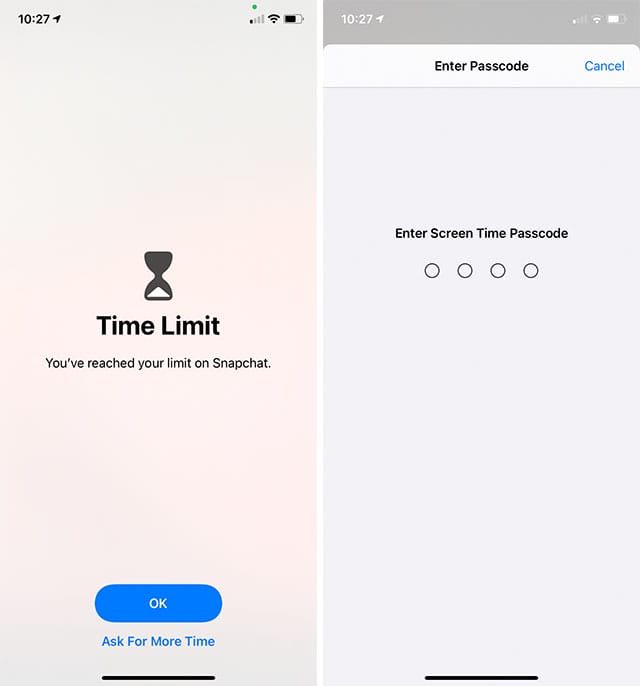 This method is pretty decent to lock your iPhone. 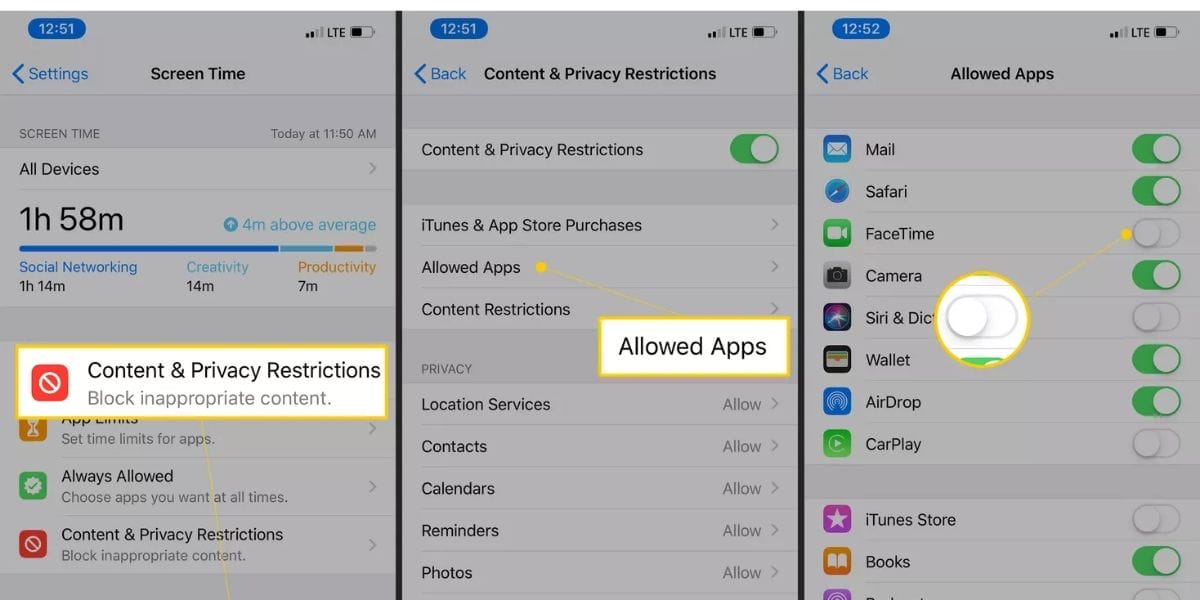 Tap on the Allowed apps option.

Now disable the toggle switches of the apps you don’t want to use.

You can now check if it works.

Besides the Restrictions feature, there is another way to enable App Lock and that is by using Guided Access.

Guided Access is a nuclear app locking option that prevents you from exiting the app you already have open. This feature becomes helpful when your kid is using your phone and this feature ensures that your kid doesn’t venture anywhere else.

Go to Settings and then General. 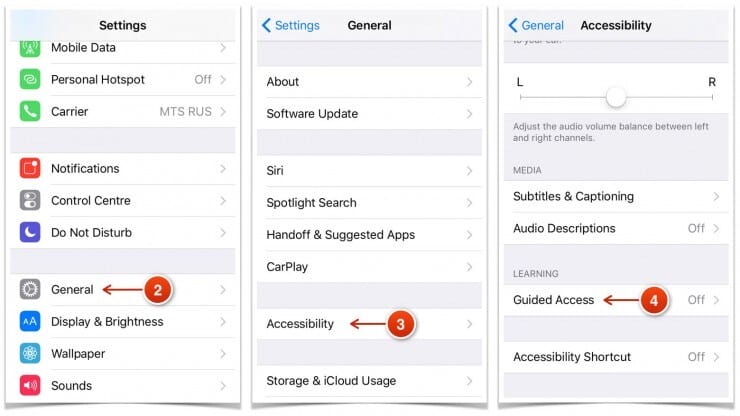 After turning it on, tap “Passcode Settings” to set up the passcode for use.

Now, to start Guided Access mode, just launch the app you want to restrict and triple-tap the home button. 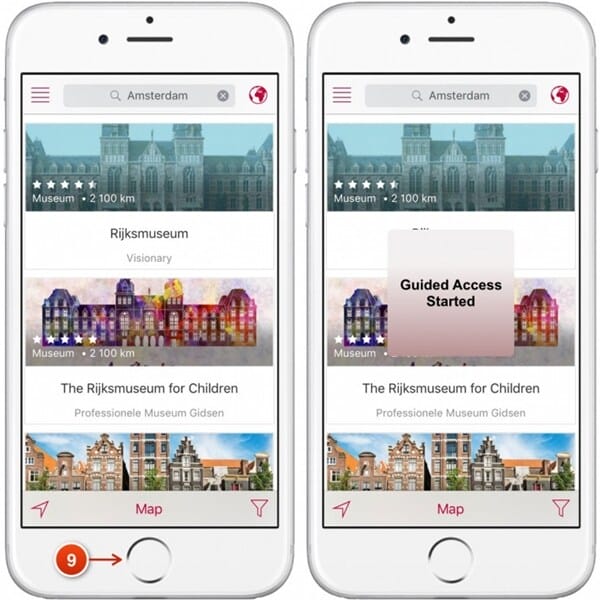 Your phone would be limited to the app you are currently using. In addition, you can restrict the use of certain app functions. 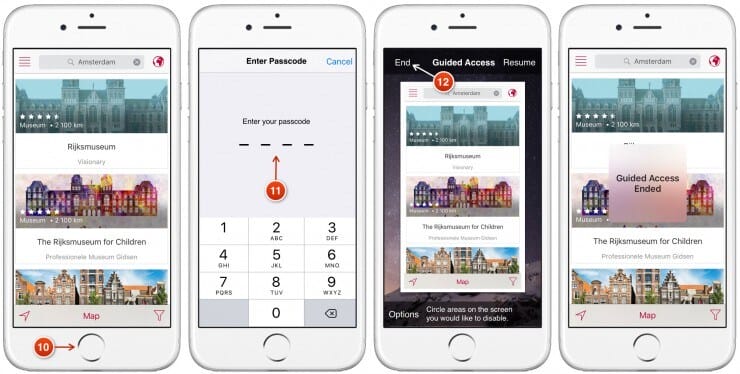 If you want to exit the guided access mode, just triple tap the home screen and enter the passcode.

You can also use Siri Shortcuts. Just follow the steps:

First, open the Shortcuts app on your iPhone and create a new shortcut.

Then tap on “Add Action”, type “Ask for input” in the search bar and select it. 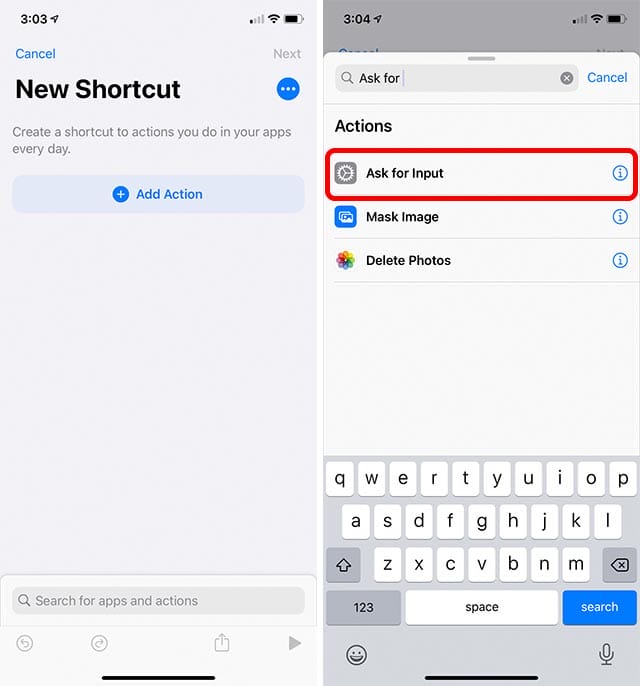 After that, choose between “Text, Number, URL, Date, Time, Date and Time”. Suppose you selected Number as input. Also, add a passcode prompt by tapping “Prompt” and typing whatever you want. 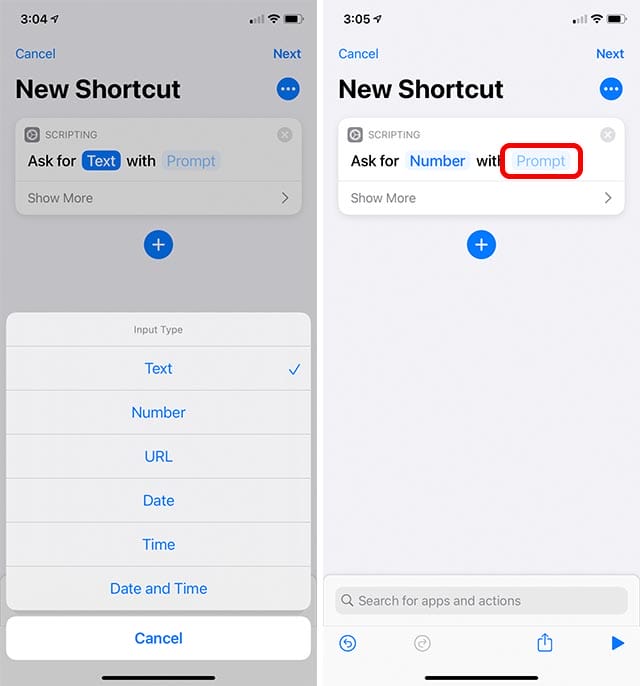 Now add another action, search for “if” and add it to the shortcuts.

Then tap on “Condition” and select “is”. 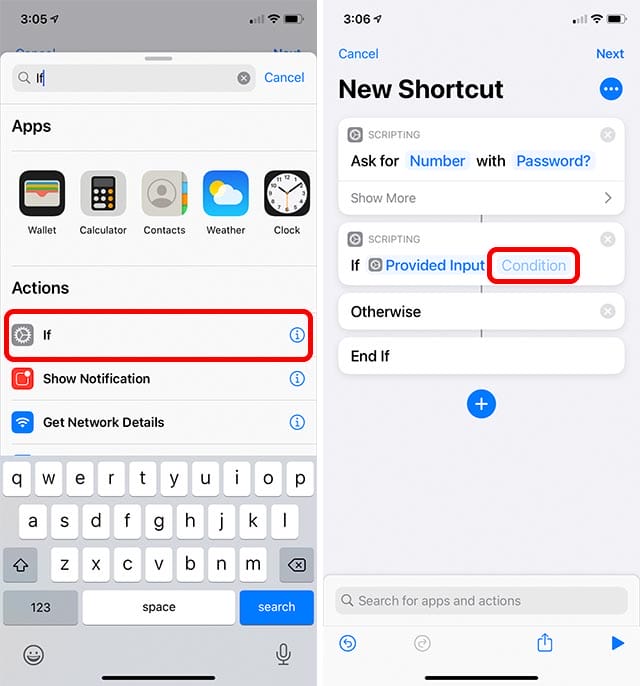 In the first action, tap “Number” again and enter the password you want to enter. Example: You entered 1234 as the password and then “I would suggest not using this password”.

So the basic setting is done. Let’s do the rest.

Add a new action called “Open” to the shortcuts and drag it between the “If” and “Else” blocks.

Now select the app that you want to block. For example: you select the calculator app.

And it’s done, the shortcut is now functional.

But wait, what would happen if someone tried to open our app? We want to find out who tried to open the app. So let’s add some traps to catch the intruder.

Add another shortcut and search for “take photo” and change the camera from “rear” to “front”.

Tap “Show More” and turn off the toggle that says “Show Camera Preview”. 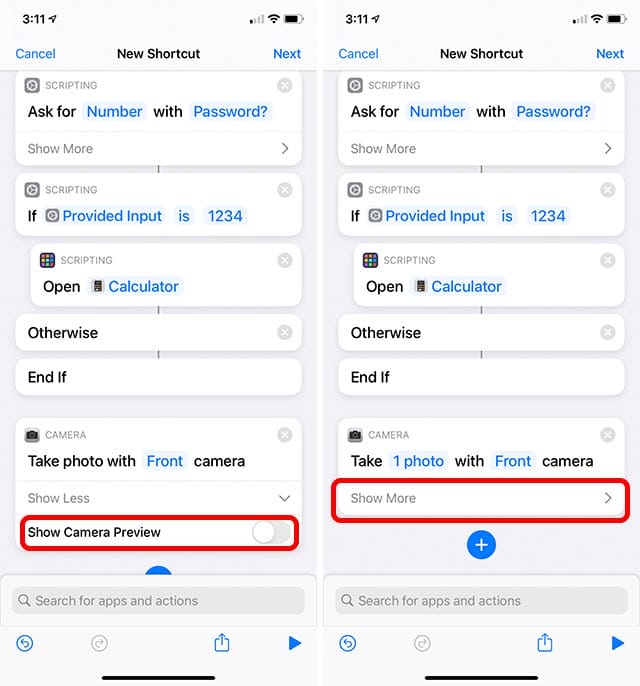 Now drag the “Take Photo” action between the “Else” and “If” blocks.

Next, add a new Save to Photo Album action to your shortcut and drag it under the Take Photo block.

So now, if someone enters the wrong passcode, your iPhone without their knowledge will click on a photo of the intruder from the front camera and save it in the Recents album. The link is almost complete. All we have to do is replace the actual app icon with our shortcut icon and place it on the home screen. Let’s do this.

Tap Next in the top right and give your shortcut a name. For example: You named it Lockit, after that click Done.

Now open the shortcut from your shortcut gallery and tap on the 3 dot icon. And select “Add to Home Screen”. 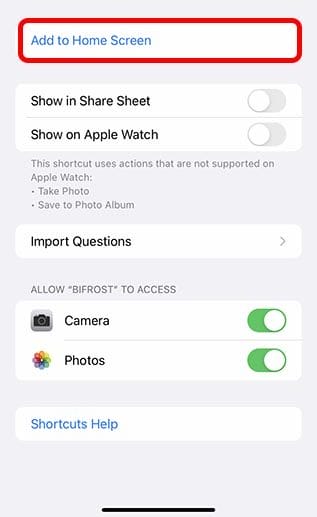 One more thing left is to name the shortcut after the name of the app you’ve locked and change the icon to the app icon. After that, tap on “Add” to see the shortcut on your home screen. 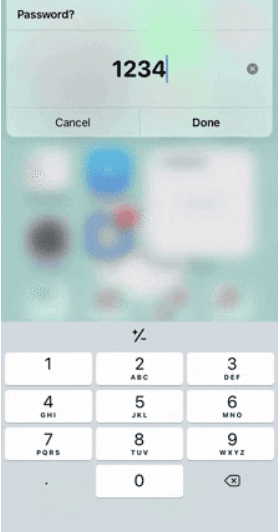 And if an intruder enters an incorrect password, a photo of the intruder is taken and you can see who tried to sneak in.

5. Use of Third Party Tools

This is the last option to lock apps directly on iPhone. However, I do not recommend this option for you. Because in order to use third-party tools, your iPhone must be jailbroken (security vulnerabilities and performance issues). The simple meaning to remove all restrictions from your iPhone.

Some popular third-party apps are BioProtect, Locktopus, and Applocker. These apps can be downloaded through the Cydia platform. Read how to lock apps with BioProtect and AppLocker.

Tutorial video to lock the apps on iPhone:

Below we provide you with a tutorial on how to lock the apps. Watch it.

Let us know in the comment what method you have used to lock your app on your iPhone. And if you want more tips and tricks like these, then visit MazicNews.com