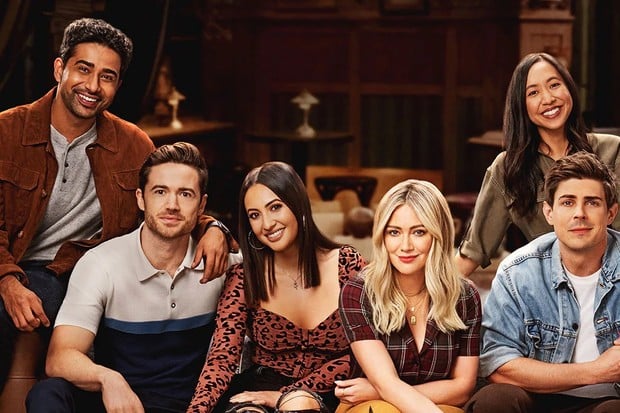 The comedy series, which also stars Hilary Duff and Kim Cattrall, will premiere on Disney+ in the UK from Wednesday, March 9th.

Here’s everything you need to know about How I Met Your Father.

It’s basically the exact same premise as How I Met Your Mother – a parent (Kim Cattrall in this case) recounts to her child the adventures and misadventures of her youth and how it led to her eventually meeting the father.

This is somewhere between a spinoff and a sequel. Set again in New York a few years after the end of How I Met Your Mother, it’s expected to feature a number of recognizable locations from the earlier sitcom – it’s also been teased that this show has some recognizable characters from How I met your mother.

Who is in the cast?

Hilary Duff will play young Sophie. You know Duff from shows like Lizzie McGuire, Younger and Gossip Girl. (She’s really good at Younger, by the way, you should definitely check that out.)

Meanwhile, Kim Cattrall takes over the role of Bob Saget and plays the older Sophie. Notably, she appears in front of the camera in proper segments and not just in a voiceover role. You know Cattrall mostly from Sex and the City, although she doesn’t appear in the controversial sequel And Just Like That.

How can I view it?

In the US, How I Met Your Mother can be viewed on Hulu. The first two episodes were made available immediately, with additional episodes released weekly thereafter.

How I Met Your Father is available on Disney+ in the UK from Wednesday 11 May. (It was originally announced for March 9, but was postponed in February 2022.)

Is there a trailer

Yes, you can watch the trailer right here and hear Kim Cattrall share a story of her youth while Hilary Duff cracks some banter.

Interestingly, although set in New York, How I Met Your Father is actually filmed in Los Angeles.

Scenes in New York are mostly shot on sound stages built in Los Angeles. However, certain exterior shots were shot on The Volume – a special set that works a bit like a very advanced green screen and was previously used in the Star Wars series The Mandalorian and The Book of Boba Fett to stand for extraterrestrial planets.

Will there be a second season?

Yes – a second season, expanded from 10 to 20 episodes, has been confirmed.

Does this have anything to do with the Greta Gerwig version?

This isn’t the first attempt at a How I Met Your Mother spinoff – shortly after that show ended, CBS tried to do a spinoff called How I Met Your Dad. It would have starred Greta Gerwig, whom you may know as the director of Lady Bird and Little Women. (You’ve Got Mail’s Meg Ryan was set to play the older narrator.)