Renowned gospel singer Osinachi Nwachukwu passed away on April 8, 2022. She is known for songs like God Of Power and The Cry. The singer frequently performed songs in the Igbo language, spoken in south-eastern Nigeria.

Osinachi’s husband, Peter Nwachukwu, testified in court on June 21, 2022. Her family clearly claims that the singer died from the beatings of Peter. Among the prosecutors, Osinachi’s twin sister, Aderonke Imana, was the third witness in court. She claims that the singer’s medical reports do not show that she has any cancer or other diseases.

Another statement from Osinachi’s family claims that Peter used to hit her with a mop stick. He also frequently referred to her as “ashawo” or thief.

According to Aderonke Imana, Osinachi had completed a stage program and received a fee (approximately N40,000). When her husband found the cash in her purse, he accused her of being a thief.

Peter will be charged with 23 counts and will be guilty of murder if the courts find him guilty. The court has also stated that he will remain in Kuje prison until then.

Initially, Nwachukwu’s husband Peter stated that she died of lung cancer. However, the statement has come under suspicion after Nwachukwu’s family claimed she died from being beaten by Peter. The situation is currently being examined. 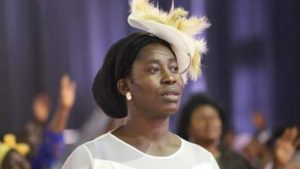 Nwachukwu’s body was taken to her hometown in Amakpoke Umuaku Municipality, Abia State, for burial on June 15, 2022. Thousands of her fans attended her funeral. In a published photo, the singer’s mother and sister are seen crying ahead of the funeral.

Nwachukwu and her husband Peter Nwachukwu had four children together.

Raised in a Christian family, she was cared for by Pastor AKA Ogene. She rose to fame after the release of her commercially successful gospel song Ekweume. She then released some of her other popular songs, including Nara Kele, You No Dey, and Use Me Play.