A father is a rock for his children to stand on.

Losing a child is terrible and devastating for every parent. Not to mention living through the murder of their young child and seeing the person who did it.

Tonio Hughes, Nylo’s father, felt the same way when Desean Brown stood in front of him. He couldn’t hold back his tears. Brown is accused of killing Nyteisha Lattimore with a knife and throwing her three-year-old son Nylo into the river. 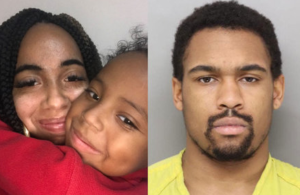 Clips from Desean Brown’s trial showed Hughes punching Brown more than once during the hearing.

But Tonio Hughes, Nylo’s father, couldn’t keep his cool. After hearing the verdict, he approached Brown and began hitting the alleged criminal multiple times. In the end, two deputies had to bring down the angry father.

Tonio was handcuffed, but he tried to escape anyway. He was therefore taken out of the courtroom. Shortly thereafter, the judge found him guilty of disobedience to the court and sent him to the Hamilton County Justice Center for a week.

Brown allegedly killed Nyteisha with a knife in December 2022. Police believe Brown had been plotting to kill the 29-year-old mother for at least two months.

The first investigation shows that Brown got mad at Nyteisha after she lost their baby together. In the end he was angry with her and plotted to kill her and Nylo.

After the crime, the alleged perpetrator went through the city looking for body bags and cleaning supplies. In the same vein, he continued to use Nyteisha’s Facebook to keep her “alive” and prevent people from becoming suspicious. Eventually he bought a body bag on eBay and dumped the body in a river.

When the police found Nyteisha’s body, they also found Nylo’s blood on a Paw Patrol blanket lying next to the body. But Nylo’s body is still missing today, although much has been done to search for it.

Desean Brown is in jail while awaiting the judge’s decision.

He’s waiting at the Hamilton County Justice Center on $1 million bail. He was also charged with murder, evidence tampering and gross misuse of a corpse.

Hughes said of his child, “All I want is for him to be remembered as a good boy.” He also said, “You would like him.”

The next time Brown is in court is August 29, 2022. On the other hand, investigators are still trying to find Nylo’s body for more information.