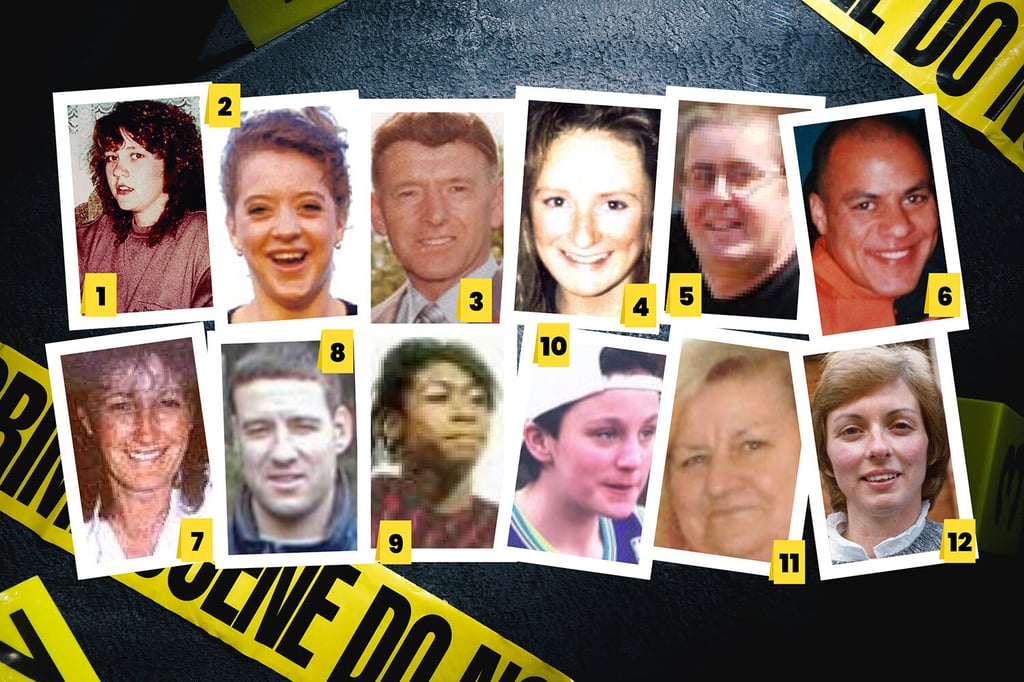 A banker shot dead on his doorstep in Scotland, a man stabbed to death in a pub and a woman found murdered in Doncaster are among the shocking cases that have never been solved.

The victims’ ages range from missing 14-year-old Sarah Benford, who is believed to have been murdered, to 69-year-old Nora Tait.

Unsolved murders include that of Alistair Wilson, who was shot dead on his doorstep in Nairn in 2004

Meanwhile, the killer of cab driver George Murdoch, who was brutally murdered in the 1980s, was never caught.

Police have continued the hunt for those responsible for the killings in a bid to seek justice for the victims and their families.

Here are 12 of the most shocking unsolved murders of the past four decades.

Scottish banker Alistair Wilson was gunned down on his own doorstep in 2004. At around 7pm on Sunday November 28, a man called the family home in Nairn and spoke to Alistair’s wife Veronica, who answered the door and asked for “Alistair Wilson”. Mr Wilson, 30, went downstairs to speak to the man and was given a blue envelope with the word ‘Paul’ on it. He went in briefly and then returned to the door a second time when he was fatally shot. No one has been arrested in the murder of Mr Wilson. The gun was recovered days later from a nearby drain. In March of this year, police traveled to Canada to conduct witness interviews in Nova Scotia. They recently said they believe the answer to his murder lies in his personal life rather than his professional life. They wanted information about a planning application for a terrace in front of a hotel opposite his house, to which he had objected shortly before his death. Police have also called for everyone who was at the Havelock Hotel two days before the shooting. Officials believe the appeal was discussed in the hotel bar on Friday November 26, 2004 and over the weekend leading up to Mr Wilson’s murder on Sunday evening.

Taxi driver George Murdoch was killed almost 40 years ago – and his killer is still at large. Mr Murdoch, from Aberdeen, Scotland, was found dead by a police officer in front of his sky-blue Ford Cortina taxi. A cheese wire found nearby was used during the attack on him. After collecting a fare on the city’s Queens Road, Mr Murdoch told his control room at 8:35 p.m. on 29 September 1983 that he was on his way to the Culter area of ​​the city but had never reached his destination. The 58-year-old turned onto Pitfodels Station Road just before the town, where he was attacked. No one has ever been arrested for the murder and Police Scotland continue to review and investigate the case. On Monday March 14, the case will be featured on BBC One’s Crimewatch Live, which airs at 10am. Last year, on the 38th anniversary of his death, an appeal was made again and the previous £10,000 reward was doubled to £20,000.

John Kennedy was murdered in a pub 25 years ago. He was stabbed to death just before 6am on Saturday 8 February 1997 at The Railway Arms pub in Tower Hamlets, London. The night before his death, the father of two had gone out with friends to visit several pubs before arriving at the Railway Arms around 3am. There were about 60 people in the pub at the time. John was approached by a suspect and a lively conversation ensued, escalating to John, 31, who was attacked and stabbed. Collapsing on the pub floor, the suspect fled the premises with another man before driving away in a vehicle. Last month, on the 25th anniversary of his murder, Metropolitan Police detectives announced a £30,000 reward for information leading to the conviction of his killer.

Police are reinvestigating the murder of Scottish mother-of-two Marion Hodge after she disappeared in 1984. Investigators from the Unresolved Homicide Investigation Team investigate the case. Marion was reported to have been dropped off in the Whitesands area of ​​Dumfries around 7.30am on Friday 6 July 1984. She reportedly carried a blue canvas suitcase and a brown handbag, wore a cream-colored blouse with a high collar, a gray skirt and black sandals. She was reported missing three days later. Marion, who was 34 when she disappeared, lived in Balgray, Lockerbie and worked at the town’s Clydesdale Bank. She was described as 5 feet 4 inches tall, of slim build, and with collar-length dark brown hair. After her disappearance without further sightings or contacts, Marion was pronounced legally dead by the Court of Session in Edinburgh in 1992. Her body was never found. The case was featured on Crimewatch Live on March 8.